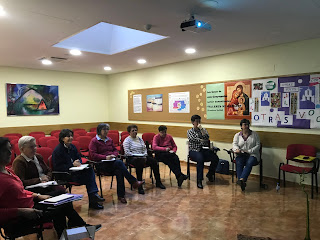 On 22 and 23 March, we gathered at the Provincial House for the Mid-Life Group: María, Fefa, Laura, Valle, Ana, Carmen, Mª Luz, Almudena Sonia and Poche. It was a day and a half intense and at the same time relaxed.

Poche and M. Luz were in charge of preparing the meeting, since each time we met, at the end of the meeting, we specified who would organize the next one. We began with a prayer, very well prepared, in which the song of Salome Arricibita, "We are land", invited us to deepen the furrows that we want to open or those that we do not allow to be opened? READ MORE